This year, the 68th Annual Conference started on 22nd January 2020 and continued up to the morning of 26th January 2020. All were night long sessions as usual. The 68th session was dedicated to the memory of Pt. Ravi Shankar on his birth centenary.

Also, the first night i.e. 22nd January 2020 was dedicated to the memory of Pt. Ramakant Gundecha whose untimely death has affected the Indian classical Music fraternity. We deeply mourn his sudden demise.

The inauguration of the 68th Annual Music Soiree took place on 22nd January 2020 at 9 p.m. 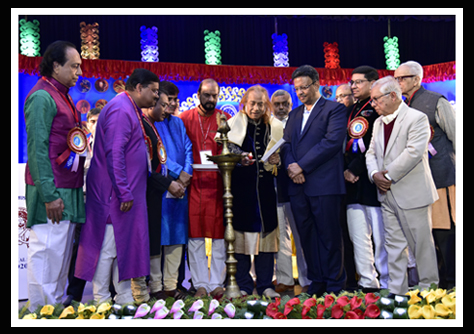 Before the inaugural ceremony, a prolific vocal recital was rendered by Vidushi Saswati Bagchi as a curtain raiser of this year’s annual conference. The inaugural lamp was lit up by sarod maestro Ustad Aashish Khan, Sangeet Samman Awardee 2020..